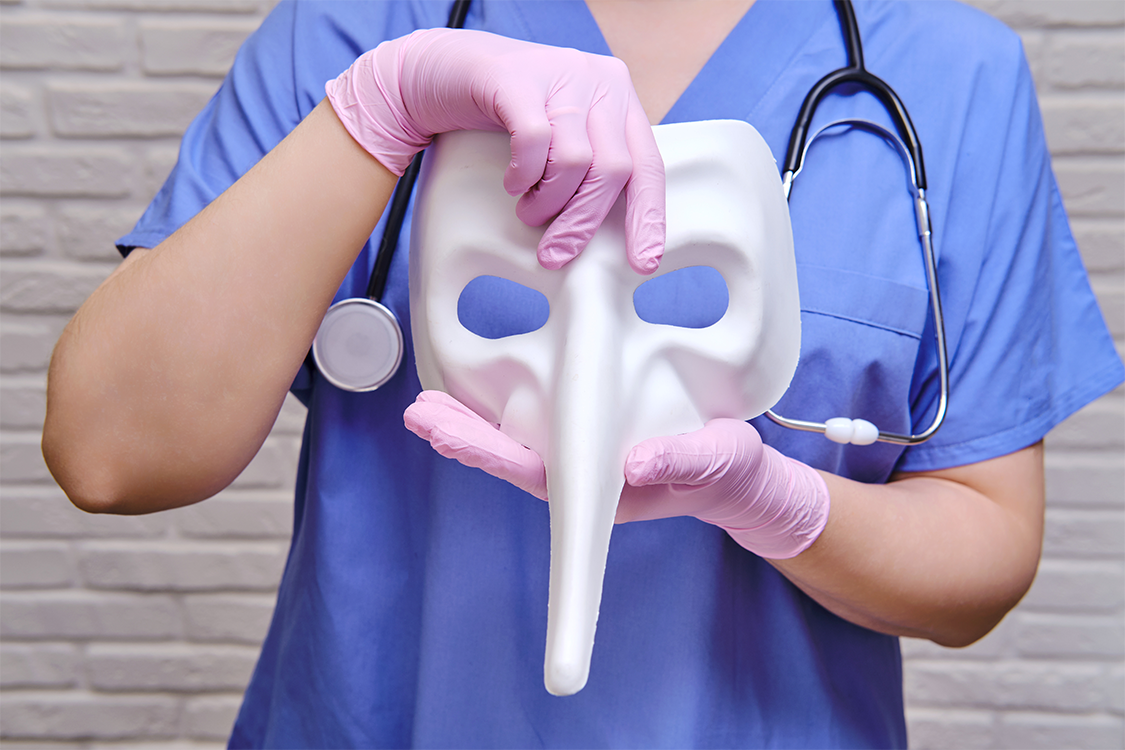 After masks became an almost globally adopted policy in 2020, it’s interesting to look back and see how the face mask has evolved since the 20th-century flu epidemic in 1918. Considering that even back when the Spanish Flu was running rampant, people understood masking was an excellent preventative measure, although some people at the beginning of the COVID-19 pandemic were reluctant to wear masks.

Let’s start back in 17th century Europe, where the Black Death claimed roughly 20 million lives over four years. The plague ended through the invention of quarantine, whereby infected individuals would isolate themselves to prevent further infections. A concept that, in the 21st century, people are all too familiar with.

During this period, doctors wore the infamously strange beak masks, which were pointed at the end and looked like a bird’s beak. The doctors of the 17th century believed these masks could filter out poisonous air and keep them safe while tending to sick patients because the beak was stuffed with theriac, a combination of herbs, honey, and spices.

These beak-style masks were a far cry from the medical masks that are common today, but they made people feel protected from infection; however, they were ineffective.

The pandemics in the 19th century are not as widely known as the 1918 influenza and those of the 20th century. The 19th century was plagued mainly by cholera pandemics, the first of which began in 1816. Masking was not part of combatting this crisis because cholera is not a respiratory illness.

COVID-19 isn’t the first time the world has seen a mask mandate become widespread. During the Spanish Flu epidemic of 1918, masks were mandatory in several cities across the United States. Photos exist of people wearing masks that look similar to the homemade cloth face coverings we’re familiar with today.

However, some of the masks were made from gauze and transparent, which could be why they weren’t that effective at preventing infections. Members of the public were advised to make their masks from cheesecloth, which, as we now know, is not thick enough to provide adequate protection from airborne illness when in a high-risk environment.

Images of some citizens wearing masks during the 1918 pandemic provide insight into why masks must be 3-layers and sealed tight to the face to effectively prevent the spread of aerosol droplets.

Many of the masks worn were simply fitted tight over the nose but hanging loose over the chin, failing to prevent germs from escaping when breathing through your mouth. In contrast to many modern masks, the masks of the 20th century rarely had ear loops but fastened at the back of one’s head with ties, resulting in a looser fit. 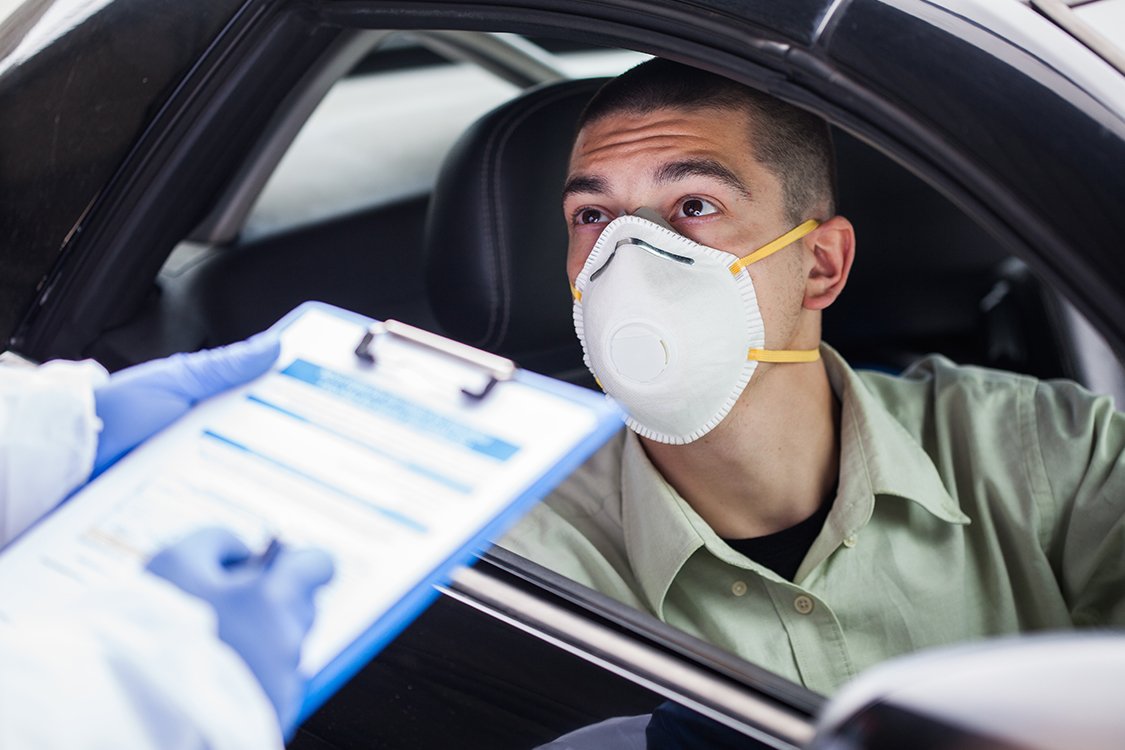 Masking in the 21st Century

The 21st century has seen two crises in which the public wore masks for protection. The first was the 2003 SARS epidemic. An epidemic differs from a pandemic in that an epidemic refers to a disease affecting a specific region or population while a pandemic spans multiple countries. SARS was an epidemic that originated in Chinese cities and led to further outbreaks in four other countries, according to WHO (World Health Organization). Canada, Singapore, and Taiwan were among the countries hardest hit outside of China and Hong Kong.

SARS was a respiratory illness that spread through large droplets expelled when a person coughs or sneezes. While distancing from infected individuals was adequate protection from this illness, masks were part of the preventative strategies implemented to mitigate the spread, especially for health care workers when performing procedures that generated aerosolized sprays. Studies at the time suggested health care workers should wear masks that filtered out 95% of particles like KN95 and N95 masks for protection due to a lack of certainty on whether the virus could also spread through aerosol droplets.

While masking in North America was not as widespread during this epidemic, surgical masks, much like the ones in use during 2020 and 2021, were worn throughout the Asian countries affected by the SARS coronavirus.

In late 2019, the most recent virus to incur the widespread use of face coverings took the world by storm. Thought to have originated in Wuhan, China, COVID-19 began to travel rapidly across the globe, finally landing in the United States in early 2020. On March 11, 2020, the WHO declared the novel coronavirus a global pandemic.

The use of masks throughout 2020 was a controversial topic, particularly in Canada and the United States, with individuals suggesting wearing one infringed on their rights, despite scientists and doctors producing increasing evidence that masks offered the best protection against spreading and contracting the virus.

In early to mid-2020, citizens were encouraged to wear homemade cloth face coverings or a scarf and leave the medical-grade masks for health care workers because of a shortage in the American market. However, as the year progressed, further information about COVID-19 transmission led to more specific recommendations for safe masking practices.

Today, the KN95 mask has evolved to become commercially available in the US. Rather than appearing like a white cup covering the mouth and nose with yellow elastic straps, they’ve been streamlined to look like black cloth masks with ear loops that have a flap cupping the bridge of the nose and under the chin to limit airflow in and out of the mask.

Cloth face coverings look different from back in 1918 as well. Cheesecloth is no longer the standard, and today people are being told to ensure their mask has three layers, including an absorbent inner layer and a non-absorbent outer layer. Many of these masks also have adjustable ear loops and contouring nasal strips so you can ensure the mask fits tightly to your face.

Masks today are significantly more effective than previous centuries because of the increased understanding the medical community has about airborne virus transmission and filtering out harmful particles.

Rather than filling the interior of a mask with herbs as doctors did in the 17th century, you can feel confident donning a 3-ply medical mask or respirator from ICU Productions, knowing it’s been FDA and CDC approved for your protection.